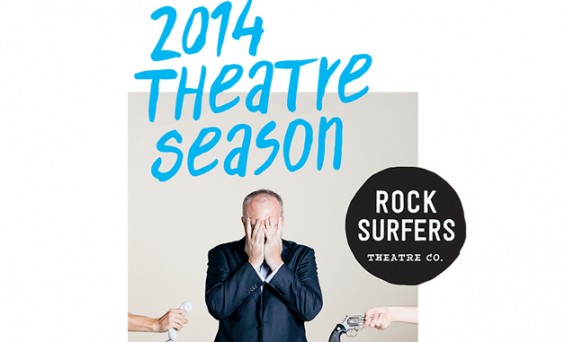 Welcome to the Rock Surfers 2014 Season.

The year ahead is filled with urgent political discourse, pitch black comedy, innovative collaborations, jam-packed festivals and a few superheroes too.

SYDNEY COMEDY FESTIVAL (13 May)
Sydney Comedy Festival hand-pick the funniest and freshest acts of Sydney’s biggest annual comedy event and squeeze them Into one hilarious night of world-class comedy. This is the best value ticket in town, so don’t miss out!

THE BOAT PEOPLE by Benedict Hardie (29 May – 21 June)
Rock Surfers have teamed up with multi-award winning theatre company The Hayloft Project to premier a black comedy about our desire to decide ‘who comes to this country and the circumstances in which they come’. Life vest not included.

THE SUPERHERO TRAINING ACADEMY (30 Sep – 4 Oct)
Hey Kid! The Superhero Training Academy needs YOU! Suit up, get the moves, get the powers and Pow! Bam! Snurk! your way to victory. Theatre meets workshop meets magic, told in rap and rhyming slang. Ages 6-10.

THE WAY THINGS WORK by Aidan Fennessy (5 – 29 Nov)
With the support of Cordell Jigsaw Zapruder (CJZ) we will present a newly commissioned play by Aidan Fennessy. A tense political thriller about the business of business and how we get the kind of criminal we deserve.

CUT & PASTE (Various)
Rock Surfers team up with Giant Dwarf to present a bi-monthly scratch night which invites playwrights, comics, musicians, poets, cabaret artists and the occasional strong man to try out a new ten-minute idea in front of you, the audience. Giant Dwarf (199 Cleveland Street).

THE REMOVALISTS (On tour)
Leland Kean’s razor sharp production of one of David Williamson’s most popular and explosive plays hits the road on a national tour, with Critical Stages, at Brisbane Powerhouse and Glen St Theatre