Ulysses comes to the iconic Bondi Pavilion for the first time.

Since 1954, Bloomsday has been observed in cities across the world to celebrate the life and work of Irish writer James Joyce, and to mark 16 June 1904, This was the day on which Joyce set the events of his modernist masterpiece Ulysses – the day on which Joyce brought Dublin to the world through the eyes of ordinary people thinking extraordinary thoughts and changed literature forever. 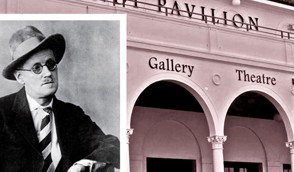 ‘Bloomsday on Bondi’ is organised by the Consulate General of Ireland in conjunction with the John Hume Institute for Global Irish Studies at UNSW, Sydney’s O’Punksky’s Theatre company and the Irish Echo newspaper, and with the support of Waverley Council.

The all-day event will feature readings from Joyce’s work, theatrical performances, film and Irish music at the Bondi Pavilion on Saturday 16 June. There will also be an exhibition on the Life and Work of James Joyce commissioned by the Irish Department of Foreign Affairs and Trade.

We have chosen the location because of Bondi Beach’s iconic status around the world, because of the high number of Irish people who have made their temporary or permanent home there, and because beach scenes and proximity to the sea are such important elements of Joyce’s novel.

It’s appropriate that we have an all-day event with breakfast, afternoon and evening sessions, mirroring the action in Ulysses itself which describes one man’s odyssey from morning to midnight on 16 June in Dublin.

Tickets are required for the breakfast  ($15) and evening ($20) sessions. The afternoon session with  readings from Ulysses  and Irish music from 12.30 – 16.00 will be open to the public free of charge.

Bloomsday Breakfast with readings, and music from Castlecomer (Tickets $15)